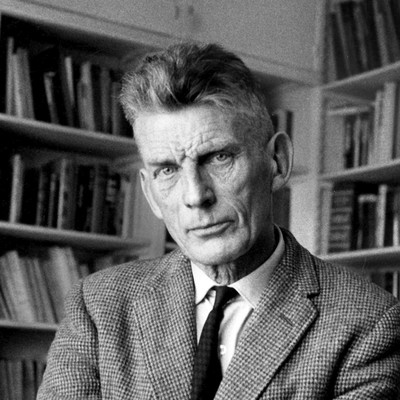 Samuel Beckett is an English and French writing author. He is also Noble Prize in Literature winner (1969). Mr. Beckett was born on April 13, 1906 in the Dublin suburb of Foxrock. Samuel studied French, Italian, and English from 1923 to 1927 at Trinity College, Dublin. He graduated with a BA and, after teaching briefly at Campbell College in Belfast, took up the post of lecteur d'anglais at the École Normale Supérieure in Paris from November 1928 to 1930. In Paris Beckett became a secretary of James Joyce. In June 1936 he completed his novel «Murphy». This novel was refused to be published by 42 publishing houses. He was finally published in 1938 with the help of English poet and critic Herbert Read.

Beckett joined the French Resistance after the 1940 occupation by Germany. In 1942 French Resistance and its members (Beckett and his wife including) were discovered. He and Suzanne fled south on foot to the safety of the small village of Roussillon, in the Vaucluse département in Provence-Alpes-Côte d'Azur. This experience was transformed into Beckett’s third novel, published only in 1953.

In 1964 Beckett’s screen was filmed as a short black-and-white movie «Film» with Buster Keaton as a main character.

In 1969 Samuel Beckett was awarded with a Noble Prize in Literature «for his writing, which - in new forms for the novel and drama - in the destitution of modern man acquires its elevation». He was one of the first writers in a new genre – «absurd theatre»